Live at Paris On Ponce: JW Wollenzien Jr and The Unforgiving Parisians 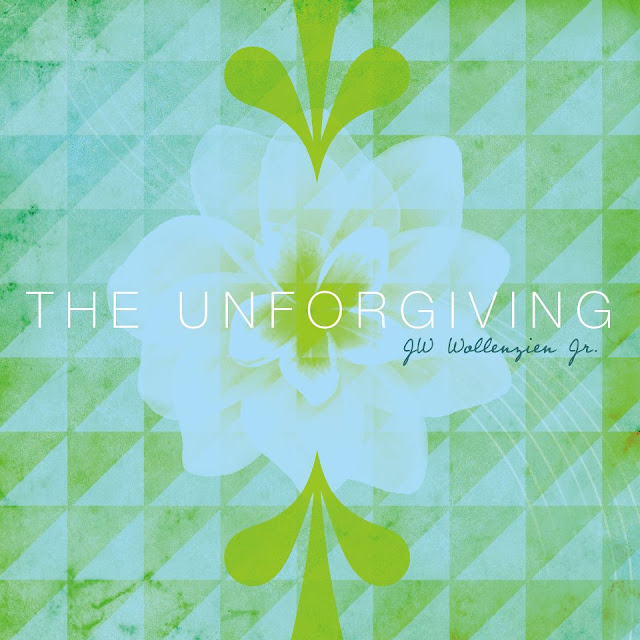 That's just the name I coined this very minute:  11:24 Sunday night in ATL, the 2nd of December, 2012.  Yeah, if you read it earlier, I've since changed it.  Next time it can be nice and short on the marquee of the venue: JW's UP!  JW Wollenzien Jr is a singer/songwriter/guitarist who has a new CD/EP available through iTunes and other outlets.  Check out his music store here for videos and music.  We had a great time with a tightly structured set of original music, along with 1 choice blues cover and many introductions and explanations.  Jon was in fine form, relaxed yet poised to make his allotted 15 minutes of fame mean the most!  I, as an employed guitarist (read: not bass guitarist) treated the night as such.  Very proud to be a hired gun as a rhythm/acoustic guitarist who can handle the harmonic and rhythmic intros and such.  Thanks to Derek  McCoy, my comrade within the Platinum ranks, for bringing me into this fun-yet-serious side project.  The tunes are rock, yet have very specific arrangements.  The guitar playing on the cd is spot on.  No flubs.  For me, the acoustic guitar parts are sometimes quite critical.  Open strings, suspended chords in conjunction with a capo, a al James Taylor (his infamous sus2 to major 3rd hammer-on on the open D shape comes to mind), ringing notes with flat-picked arpeggios in an Alex Lifeson vein (faithful readers know that my style is congruent with that particular description), chugging rhythm guitar with a Rik Ocasek/Cars muted tonality; I had the time of my life on this gig!

Need to rewind a few weeks, as I don't think I ever posted about the rehearsal.  We had 3 scheduled rehearsals.  Initially, I wasn't going to be able to make the first one, as a confirmed gig would have conflicted.  As luck would have it, the gig went away and I did make the session.  It was to be the only rehearsal in which I would partake.  It was held at Avatar, which is the site formerly known to me as Rehearse Too Much (RTM).  We were in Eric Sanders' studio room, where he gives drum lessons and takes care of his business.  Eric and I go back a few years.  I was in a band with him along with Ron Roper and Kenny Kilgore.  We had a regular (weekly?  bi-weekly?  can't remember) stand at the now-defunct Atlanta Biergarten (which was formerly Good Old Days for the longest time) in Buckhead - 3013 Peachtree Road (don't ask me how I know that address; it's all condo high rises now).  I believe the band's name was Rocket 88, and I have a cassette tape that may or may not have my playing on it.  I miss that band and those guys.  Ron and Kenny were on the same page, and acted as neo-deputy blues-police if things ever took too much of a fusion twist.  Eric was a monster then, as he certainly still is even more so.  Skinny boy with long red hair in a ponytail and more energy than Capt. Piggy, our pitbull puppy.  He's still lean - hey, that gig was when?  1994?  I'm certain that it was before I had met Sabina.  So yeah, 18 years or so is a fair stretch between seeing someone.  I did see Eric once recently at a CatDaddy & The Creations rehearsal, I guess after Mitch had decided he had something better to do.  Talk about a band imploding - it broke up as we were at Crossover Entertainment Group's studio putting together a demo recording.  I never heard the tracks.  But I digress.

Besides Eric and Derek, I met with bassist Matt Stallard, who seems to have played with everybody.  He has done the Java Monkey wine tasting events with Adrian, and he has toured with Chris Duarte, among others.  I noticed his black tapewound strings on his Jazz bass.  I need to try some out on my fretless - he said they sound great on fretless.  Nice to talk shop about bass once in a while.  Sometimes I feel as if I'm on my own when it comes to gear.  I check the web, but having somebody I know face to face makes it a bit more real.  Here are some shots from Eric's rehearsal studio back in November. 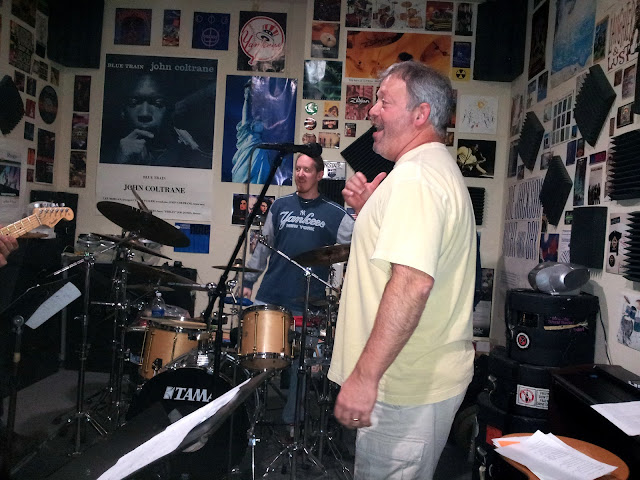 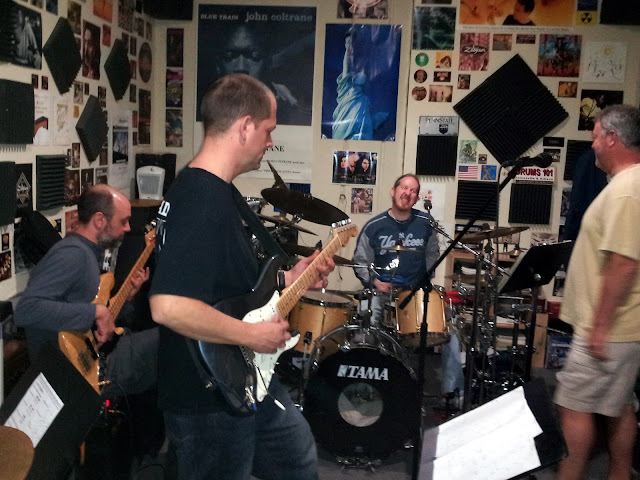 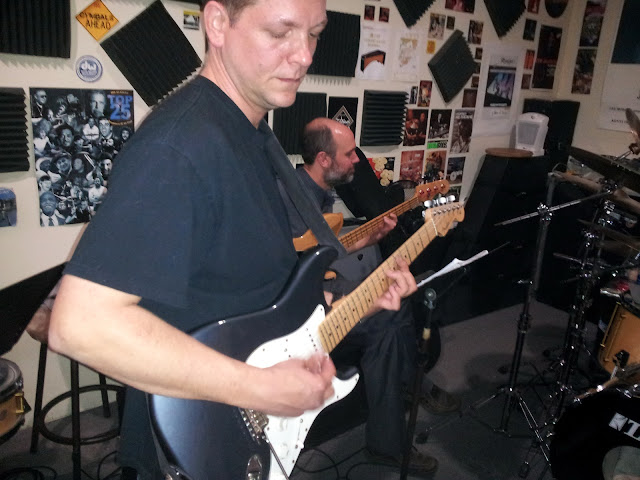 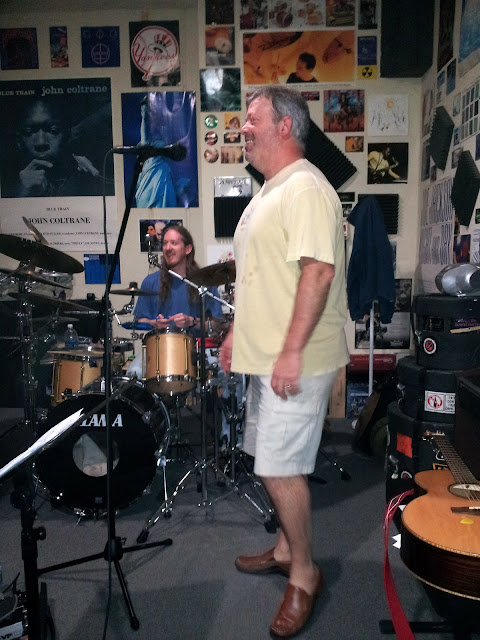 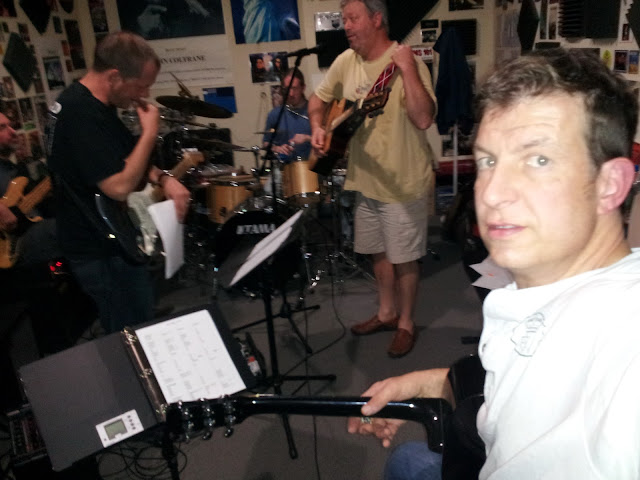 Hey, we really sounded good.  JW's tunes are honest rock songs with some well-thought lyrics.  Jon can sing with seemingly little effort.  His intonation is fantastic!  He and Lexxi traded verses in the first song, setting the tone for a great band vibe throughout the night.  He took the time to explain some of the songs and where the ideas came from;  a real natural showman.  Jason Chapman ran sound for us.  He does a terrific job and recorded the event.  My acoustic had a bit of processing: compression, a slight chorus effect, and the characteristic trebly tone it always has.  I tried to boost the lows and cut the highs, but it was still quite bright.  I haven't had a chance to listen to the tracks, but I hope it had a place in the mix.  I felt good about my picking parts.  So easy to accidentally mute a string and kill the sound of the ringing and chiming arpeggios.  My background in learning of those Rush songs back in the day may have saved me on this!  Eric and Matt were a rock-solid rhythm section.  Lots of energy and a great groove throughout!  Eugene on the harmonica had some nice solos, just not enough of them!  Lexxi was a great presence up front.  She lent a stylish sense of class to our manly proceedings.  Derek was the hero of this night.  His guitar playing was precise and passionate.  He covered the parts from the cd like the pro he is.  He even copped that acoustic tune all by himself, as JW forgot to turn up his guitar volume.  Jon provided food and drinks for all who came to the event.  He spared no expense on the buffet meal and open bar!  Wow Jon!  His beautiful wife was there, hearing these tunes for the first time and proud of her man!  I was happy to be a part of this incredible night of music. 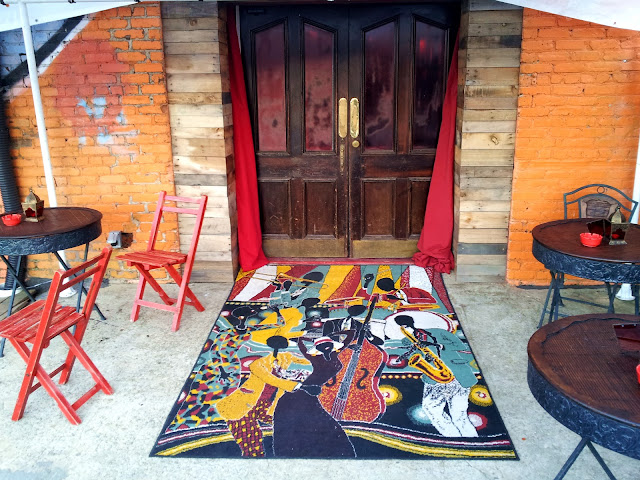 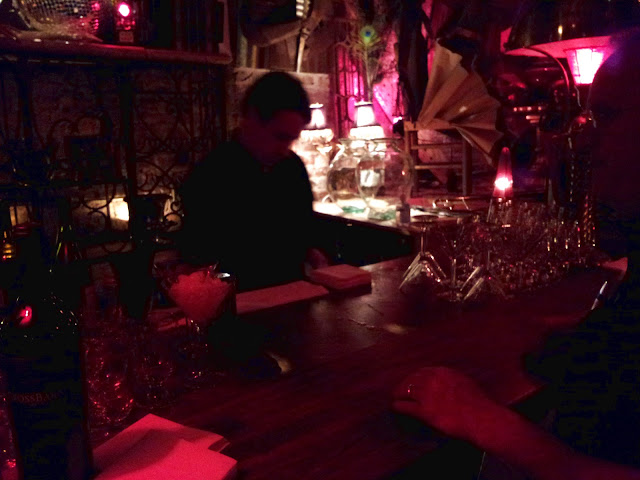 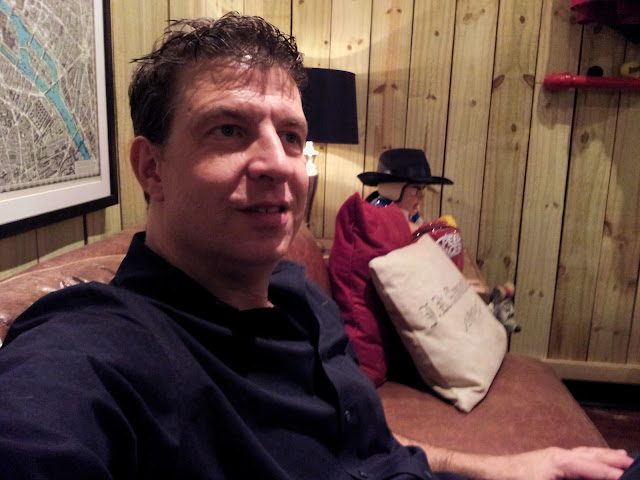 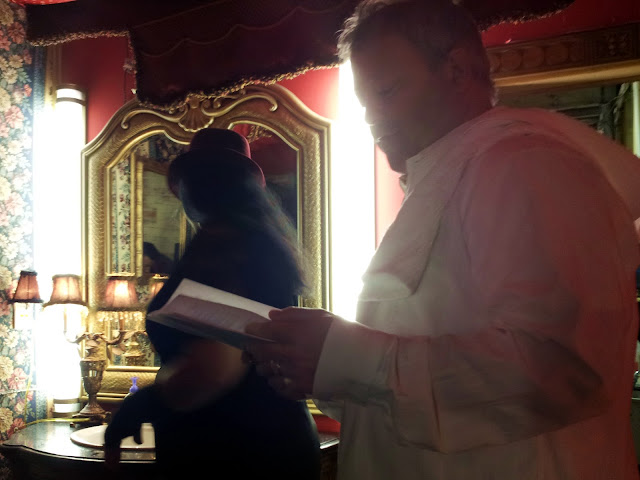 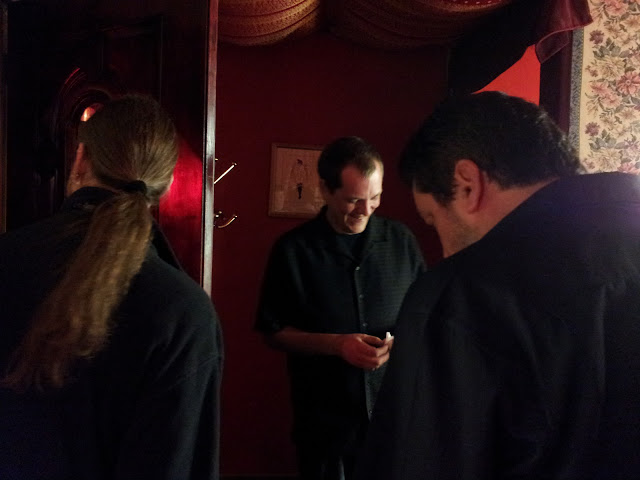 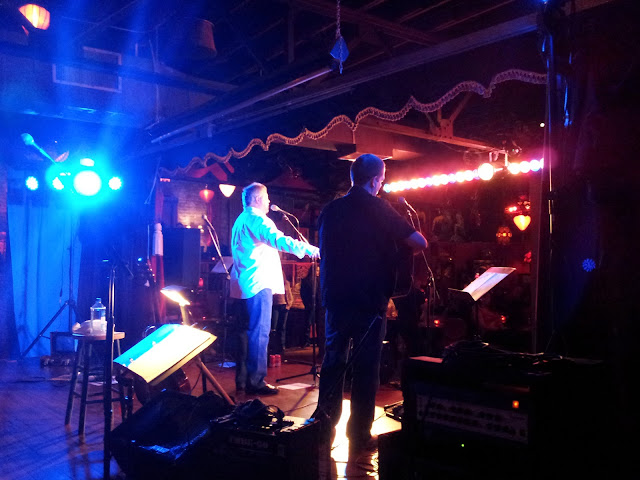 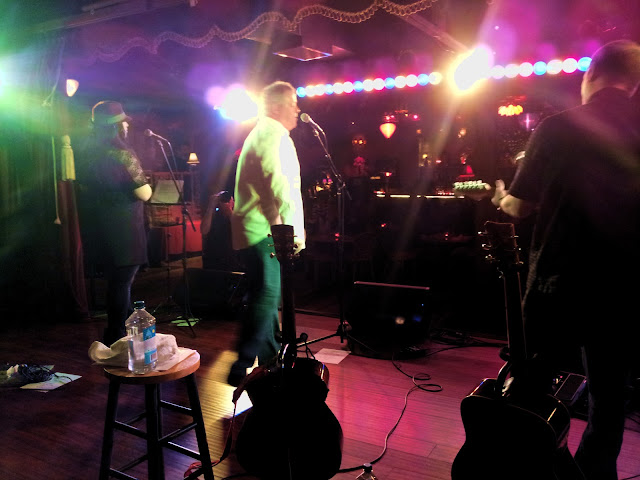 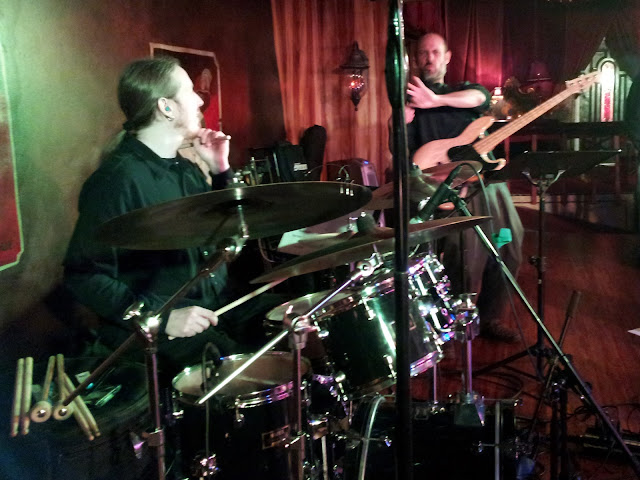 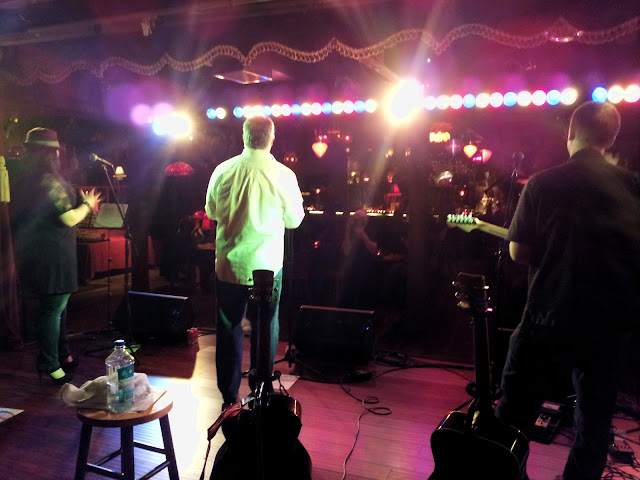 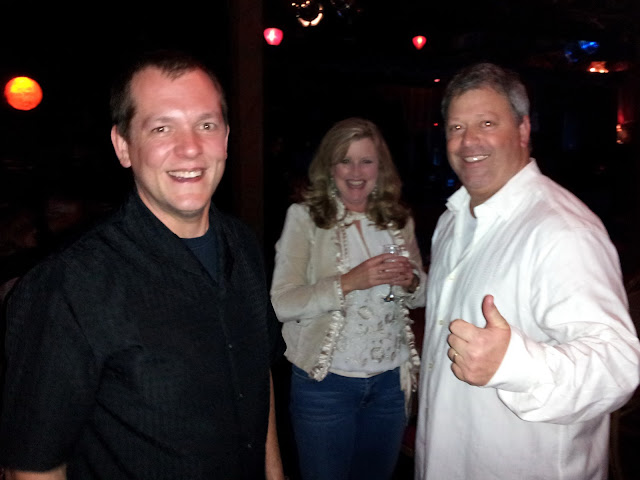 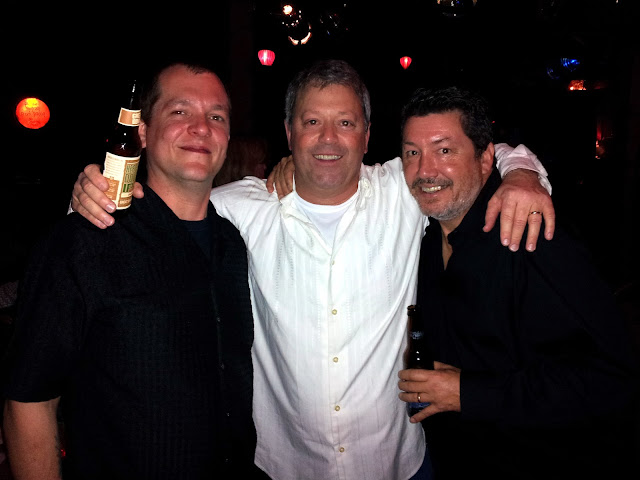